KUALA TERENGGANU: Kijal state assemblyman Datuk Ahmad Said was sworn in Sunday as the eighth Mentri Besar of Terengganu ending a stand-off that began on March 10.

Just after the ceremony ended, Ahmad, 51, was seen looking for former Menteri Besar Datuk Seri Idris Jusoh, his counterpart in the tale of two mentris besar. 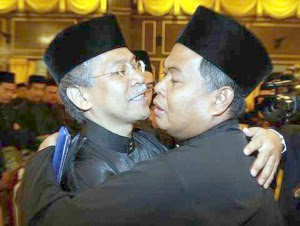 He walked straight to where Idris was standing and embraced him in an emotional reconciliation.

Ahmad, clad in black baju melayu, was almost in tears when he held Idris, who was also red-eyed.
Former Terengganu Mentri Besar Datuk Seri Idris Jusoh (left) and new Mentri Besar Datuk Ahmad Said hugging each other after the swearing in ceremony at Istana Maziah in Kuala Terengganu. Ahmad Said declared that he would consult Idris in the running of the state government.

The new Mentri Besar was heard saying semuanya dok selesai (it’s all over) to Idris.

Ahmad earlier took his oath of office before the Regent of Terengganu Tengku Muhammad Ismail Tuanku Mizan Zainal Abidin, at about 9.30am in Balairong Seri at Istana Maziah.

All 23 Barisan Nasional assemblymen were present at the swearing-in, which was over in 10 minutes. PAS president Datuk Seri Hadi Awang led Opposition leaders and eight lawmakers to witness the ceremony.