Editor Admin
Opening ceremony highlights Terengganu’s culture and traditions
THE 12th edition of the Malaysia Games (Sukma) was declared open by the Yang di-Pertuan Agong Tuanku Mizan Zainal Abidin in a colourful and glittering ceremony at the Gong Badak Sports Complex last night. The ceremony highlighted Terengganu’s friendly and gentle way of life. The performances brought to the fore the culture and traditions that are unique to the East Coast state as well as their rich marine life and tourism attractions. Although the opening ceremony, held at the new RM270mil 50,000-capacity main stadium bearing the King’s name, started at almost 9pm, the carnival-like atmosphere inside and around the arena had begun hours earlier. 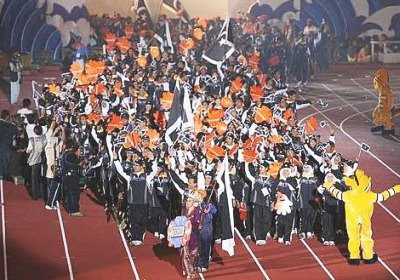 The main dignitaries who attended the ceremony were the Agong, who is also the Sultan of Terengganu, and the Raja Permaisuri Tuanku Nur Zahirah as well as Terengganu Mentri Besar Datuk Ahmad Said, Youth and Sports Minister Datuk Sabri Ismail Yaakob and Information Minister Datuk Ahmad Shabery Cheek. The show kicked off with the ‘underwater’ performance by hundreds of schoolchildren. Dressed in bright orange, yellow and blue colours, they recreated scenes of the rich and diverse abundance of marine life in Terengganu. Also making an appearance were the Games mascot, Si Diman, an orange and white striped clownfish that looks similar to the popular Disney cartoon character “Nemo”. The next few performances showcased Terengganu’s cultural dances as well as a silat demonstration. It was followed by the marching in of the 15 contingents, led by the 2006 hosts Kedah.

The biggest cheers from the crowd were reserved for the host state’s contingent, who were the last to enter the running track in their smart black and white outfit. Besides Kedah and Terengganu, the other teams contesting in the 12th Sukma are Negri Sembilan, Pahang, Perak, Penang, Perlis, Sabah, Sarawak, Selangor, Kelantan, Federal Territory, Johor, Malacca, Terengganu and Brunei. The opening ceremony was a departure from the usual procedure of lighting the Games cauldron. Arrows presented by the Agong were taken by 15 young archers to the field area. Using their bows, the archers fired their arrows towards a giant bull’s-eye target at the other end of the stadium.

As the arrows hit the target, a volley of fireworks from around the stadium lit up the Terengganu night sky. At the same time, a giant clam structure opened up to reveal a rotating baton with the words Sukma Terengganu 2008 carved on it. After the King declared the Games open, he was introduced to the chef-de-missions of all 15 contingents. The dignitaries left shortly after, but the crowd stayed on, despite the fact that it was close to midnight, to lap up the song and dance show featuring several popular local artistes. The chase for the 404 golds, 404 silvers and 505 bronzes in 31 sports in the 12th Sukma begins today.