Kapas Island abounds in numerous deserted, white sandy beaches lined with shady palm trees to make a perfect niche to laze on. Relaxation is the foremost occupation here. It offer a refreshing change from everyday haste.

The island is just 4 nautical miles from Marang. It's is an ideal place to break away and chill it out. Kapas Island is made up of two islands Gem Island (Pulau Gemia) and Kapas Island. Kapas Island is about easy access, choices and plenty of bargain. Places to stay ranging from camping sites to dormitory to island resorts with en suite facilities. Only thing that never change on this island is the constant number of backpackers arriving and departing each day. July, August and the local holidays are the best times to go. 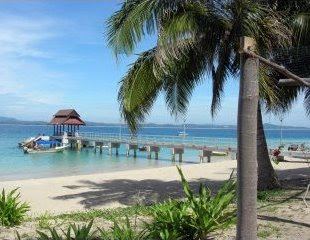 An island famous for its clear waters, sandy white beaches and swaying palms, it is relatively isolated. Home to an infinite variety of hard and soft corals, the waters around the island abound with seashells, fish and turtles.

The island's laid back atmosphere is ideal for relaxation but the more adventurous will find it is also a haven for swimming, snorkeling, windsurfing, kayaking, boating and fishing. Kapas has somehow become the refuge of those who refuse or could not join the Perhentian' crowd. The island is favorite with the local people in the very high season and the public holidays.

Kapas Island offers a variety of adventures to the Sun and Sea lovers. The hidden sweats of nature's splendors both on land and below the sea. You could track into the island's interior and amazed at the colorful natural flora and fauna along the way. Explore the most varied marine life among the many coral reefs around the island. Snorkeling and underwater diving is popular along stretches of shallow coral reefs of the island's western shore.