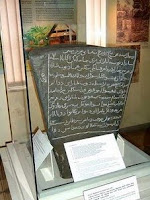 The Islamic Inscription on the Inscribed Stone of Terenggany is a profound statement of Terengganu's Islamic Past. The Stone, which dates as far back as the early 14th Century, is known to be the earliest piece of inscription in Malay using the Jawi script which states Islam as the official religion of Terengganu, along with an Islamic law guide pertaining to misdeeds and sanctions.

Batu Bersurat Terengganu is the oldest artifact with Jawi writing on it. The artifact proves that Islam reached Terengganu earlier than 1326 or 1386. It was accidentally discovered near Teresat River at Kuala Berang, Terengganu, Malaysia by an Arab trader named Sayid Husin bin Ghulam al-Bokhari in 1899 after a flash flood hit Kuala Berang.

The inscribed stone weighed about 215 kilograms, 84 centimeters in height, 53 centimeters wide at the top and 27 centimeters wide at the bottom. The thickness of the stone is 24 centimeters and is made of granite which cannot be easily broken. The inscriptions are in Arabic - Malay believed to be written on the 22nd February 1303. Among the inscriptions on the stone are the ten Islamic laws and their punishments. With the discovery of this stone, historians felt that Islam has reached Terengganu before the 14th century. The inscribed stone also proved that a government existed in Terengganu long before Melaka was founded. Even after Melaka was founded, Kuala Terengganu still remained an important port.