The Festival of the Sacrifice (Eid al-Adha) is one of two major Islamic celebrations and takes place on the tenth day of the Islamic month Dhul-Hijjah, the last month of the Islamic calendar.

Millions of Muslims from around the world make an annual pilgrimage to Makkah in order to worship Allah and to commemorate the willingness of the Prophet Ibrahim (peace be upon him) to sacrifice his son Ismail in response to a command from God. 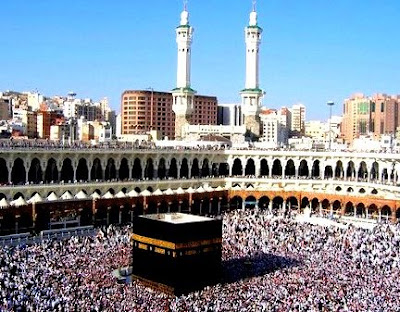 For Muslims, the Hajj is the fifth and final pillar of Islam.

Muslims believe the Prophet Ibrahim was told by Allah to build a shrine dedicated to him. Ibrahim and his son built a small stone structure (kaaba) which was to be the gathering place for all who wished to strengthen their faith in Allah.

In recent times the number of pilgrims making the journey to Mecca has risen dramatically and upwards of two million pilgrims are expected this year from as many as 70 nations.

Hajj takes place each year between the 8th and the 13th days of Dhul al-Hijjah, the 12th month of the Muslim lunar calendar.

Happy Aidil Adha to everyone.