The Ending of SUKMA Terengganu 2008 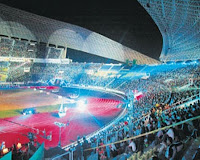 A spectacular closing ceremony, presided over by Prime Minister Datuk Seri Utama Abdullah Badawi, brought the curtains down on what has been one of the most successful editions of the SUKMA. Unlike previous editions that had been dogged by numerous controversies, SUKMA Terengganu hardly had any major issues, instead it was super high in action – 7 national records and 54 Games records were created throughout the 10-day multi-sports extravaganza. The high level and quality of competition at this SUKMA resulted in good crowds at the majority of the venues. Fans were treated to top class competition involving the young stars of the country.
Football, constantly under criticism for the low standard of the national team and low attendances the game has these days, drew huge crowds, especially in the semi-finals and final which were played out in front of capacity audiences. Terengganu were not only gracious and accommodating hosts but proved to have excellent athletes, who amassed a total of 61 golds, 39 silvers and 47 bronze medals. That was enough to lead them to the overall title for the very first time in the history of SUKMA. Certainly, it will go down as one of their greatest ever sporting achievements
.
Terengganu Mentri Besar, Datuk Ahmad Said, was clearly an inspiration to the state’s athletes, rushing from one venue to another to support them. The athletes, fired up by the tremendous local support, went on to reel in gold after gold, this was especially so at canoeing (14 golds), cycling (nine), athletics (six) and silat (six). Selangor, overall champions at the previous SUKMA, had to settle for the second spot this time around with 54 golds while Sarawak were third with 52.
While Selangor missed out on the overall title, they had some consolation in the fact that their star swimmer Foo Jian Beng, along with Sabah’s Marellyn Liew, were adjudged the Best Athletes of SUKMA Terengganu. Jian Beng, winner of four gold medals, cracked two national records while three-gold medallist Marellyn helped herself to one national mark. The closing ceremony, which was telecasted live by host broadcaster RTM, attracted over 40,000 fans who came to celebrate their athletes’ success. In his speech, Datuk Ahmad Said, thanked the people of the state for their support. He also announced a one-day holiday for the state of Terengganu on Tuesday.
The Prime Minister meanwhile showered praises on Terengganu for their excellent organisation of the Games before officially declaring the 12th SUKMA officially closed.