Bukit Puteri is situated at the mouth of Terengganu River. It covers an area of about 658 hectares and the height is about 200 meters from the sea level. Bukit Puteri was built to defend the Rulers of Terengganu from attacks by the enemies. Bukit Puteri is easily accessible as there are steps leading to the top. Bukit Puteri was said to have originated as a place of residence for Puteri Bunian. However, the princess left Bukit Puteri when the local residents borrowed her cutlery and did not return them to her. According to legend, this hill was opened by a chieftain from Johor named Tuk Raja Menteri who came to Terengganu to install Sultan Zainal Abidin I as the first Sultan of Terengganu.

A few historical artifacts still exists on Bukit Puteri till this present day. Among t 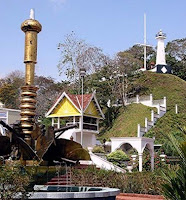 hem are a big bell, cannon, a flag pole, light house, graves and a defence wall. However, long time ago there were many cannons at Bukit Puteri. The cannons were believed to have originated from Spain, Portugal and the Malay States and were given names such as Seri Jamlor, Seri Buih, Seri Johor and Laila Majnun. The bell that still exists today was built during the reign of Sultan Zainal Abidin III in the year 1908. The bell was made from yellow copper, the circumference and height of the bell were 228 centimeters and the weight was 175 kilograms. The bell was sounded when there were rampage, fire or enemies attacking the state. It was believed that the bell was guarded by a boy from the royal family. The boy job was to sound the bell if any emergency or natural disasters occurred.

A cave known as Gua Puteri can also be found here. It was used as a place to keep the gun powder, stone and iron bullets. The flag pole that is on top of Bukit Puteri was used to raise the royal flag when there were any royal ceremonies held. The weight of the flag pole was around 18 meters high. The lighthouse on the peak of Bukit Puteri functioned as a guide for fishermen and sailors that siles into Kuala Sungai Terengganu. During the reign of Tengku Umar, he built a palace called the Green Palace at the foot of Bukit Puteri but was burned down in 1882. He built a new palace near the site of the Green Palace and was named Istana Maziah which still exit until today.

How To Get There
Walking distance from Pasar Payang. You will find most places in Terengganu easily accessible. There is a host of transportation modes that one can choose from, when travelling and within Terengganu, i.e. by air, road, buses and coaches, taxi.